What do you mean, I can’t get it until July?! – Supply Chain Troubles 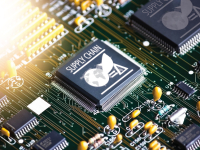 We all have seen some serious shortages caused by the Pandemic. Of course, masks and disinfectant were not to be found a year ago, and who can forget the bare shelves where toilet paper normally sat.

But as time went on, other goods started showing up in short supply. Certain types of sodas disappeared because aluminum was in short supply. Then durable goods were hard to get because of manufactures’ supply chain issues combined with an increase in home remodeling.

Similarly, if you have tried to order certain networking equipment in the last 6 months, you have probably been frustrated with the almost absurd delays in getting product. It seems that specialty wireless products (e.g., point-to-point bridges) and network switches have been especially hard hit. Orders placed now are given an ETA of June or July or even longer. Sometimes using a different distributor or supplier has helped, but in many cases, there is just no product to be had.

The fundamental component that is responsible for these delays are certain computer chips, also known as semiconductor or integrated circuit. Part of this current backlog can be traced to the pandemic, where companies cut back production as their work force was reduced or sent home. But it is also in part due to the trade war between China and the US. The US cut off chip imports from certain Chinese manufacturers, shrinking that supply in the US. The fear of an expanding trade war also caused many global product manufacturers to stock up, eating up existing inventory. Moreover, just 2 companies, Samsung and Taiwan Semiconductor Manufacturing Company (TSMC), account for over 80% of the worldwide chip production, and they just couldn’t increase their output enough to make up for the increase in demand.

Moreover, the current shortage is much more widespread than just switches and wireless equipment. Because of the broad integration of computing technology in consumer products, this chip shortage is affecting more than just the computer and IT market. In this round, the automotive industry is really suffering due to the shortage, with GM saying it will cost them $2 Billion and Ford at $2.5 Billion.

But the situation appears to be improving. There is seemingly light at the end of the tunnel for the pandemic, and the high demand due to stockpiling seems to have leveled off, so shortages are easing.

As supplies re-enter the market, SpotLink will continue to use its multitude of suppliers to find products as they reappear on the market and get them delivered as quickly as possible to help minimize the impact on our clients.