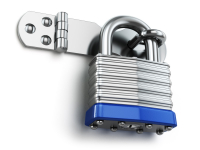 Last year several of our articles were about cybersecurity. That was intentional, considering how widespread and ever changing the cyber threats are that we face today. Similarly, our project teams spent a significant portion of their time on maintaining, reviewing, and improving the cyber security of our clients.

With every one of those cyber security efforts, we also review the physical security of the installation. Having been at this for many years now, we often find it surprising how some organizations are diligent on their electronic cyber security, while not giving the same attention to their physical security. More than once we have left meetings discussing cyber security to find servers in unlocked rooms, consoles left logged in, and drives and flash memory sitting around within arm’s length.

The good thing is physical security is easy! Much easier than cybersecurity. Follow these simple tips, which we’ve organized from the most obvious to most obscure, to be sure your highly fortified virtual perimeter isn’t circumvented with the push of a door.

If you implement the above, you can rest much easier at night knowing that your physical IT is well defended.